Just to prove I'm not all about the baking here's tonight's dinner. The broth's mostly soaked dried mushrooms which I added to a leek sauteed in sesame oil with lots of garlic and dried chilli, then there was vegetable stock, black pepper, a squeeze of tomato puree, a big handful of spinach, ready-made soba noodles and toasted mixed seeds to finish.

I used two types of veggie sausages; Cauldron's fared the best. It seems the trick to batter is to use equal amounts of everything - I broke the eggs into a jug so I could see how much space they took up, then used the same amount of flour and then milk (which helped to swish the jug clean again). All I did was beat it all together (with a bit of salt and pepper and a dash of mustard powder), leave it for a while whilst the oil in the tin in the oven got super hot and the sausages were browning in it. After a while I opened the oven, pulled the tray out a bit, poured in the batter, pushed it back in again and LEFT THE DOOR CLOSED (so many things I read said this was important) for about 20 minutes til I guessed it'd be cooked.

As you can tell I'm a fan of 'one big thing' dinners. Also, lately, 'magic alchemy of the oven' type food where you put something into the closed-heat when it's one thing and then take it out to find it's something other. I believe in common parlance this is called baking, but since baking's apparently all the rage at the moment I'd rather not use the term.

Needs a bit more cooking, but the sauce is a revelation. This is Ottolenghi's take on Jannson's Temptation. The anchovies take it from yum to SUB-LIME. 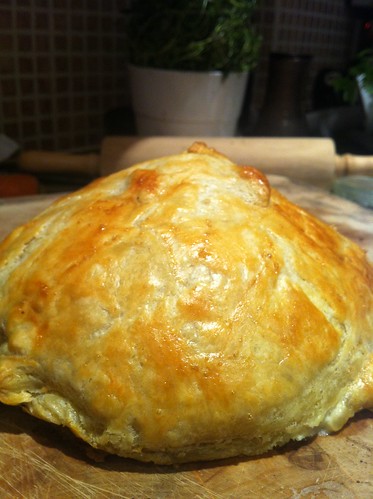 Ha! the last time I posted here was 6th Jan last year...must be something about the time of year!

Vegan potato salad - on the basis that this sore throat is implying a cold to come and I'm not feeding the mucus monster. Boiled waxy potatoes refreshed in cold water asparagus and broad beans ditto, and radishes in a mustard, olive oil and cider vinegar dressing. I had some capers on the side and might chuck some in the mix with it for lunch tomorrow. Also a slice of Sourdough with Avocado, balsamic and loads of pepper and cracked salt. Lush.

So, tonight, & indeed last night, I had the following:

1. Veggie "fish" cakes from Budgens (take 10 mins to cook) with jalapeno & ginger sauce
2. Watercress and halved cherry tomatoes (takes as long as it takes to throw on the plate) with some capers and black pepper
3. Mange tout/sugar snaps and baby sweetcorn sorta sauted or whatever you call it in olive oil (takes about 10 mins)

slightly freezer burnt steak with all the veg, passable and awesome pork belly with broccoli and brown basmati from last night. I would recommend the latter. You slow cook the pork belly, 90 minutes in total, with soy sauce, loads of chopped ginger, some cinnamon and star anise for the first 45 minutes skin down. Then for the remainder of the time you put in rice wine or sherry and a smidge of sugar turning every so often. Lush. This is no glamorous tarte aux pommes, it was just a quick supper pie, so it isn't very neat looking - but it is (I hope) attractively rustic instead!

Rub the fat into the flour, trying not to touch the fat too much (tips of fingers only) until it has a crumbly texture.  Add a little cold water (not too much!  you can always go back and add more if it isn't working) and bring together until the dough is just holding together.  Do not overwork the pastry as it'll make it tough and bready rather than crumbly and crisp.

Put the dough in the fridge to rest for at least 20 minutes.  Put oven on to preheat to 180 degrees.

Meanwhile, slice a couple of apples (or more if you have a large pie dish) and fry in a knob of butter with a couple of spoons of sugar and maybe a shake of cinnamon or other spice of your choice.  Fry until they are starting to colour, but still retain their integrity.

Take the dough out of the fridge and roll out to about 1/4 cm thickness (you probably will only need about half of the pastry, unless you have a very large dish).  Stretch over a greased pie dish or tin and cut off any long edges.  Pinch other edges together.

Blind bake the pie base in the oven for 5 minutes.  Use baking beans if you have them, but I didn't and it bubbled a bit but no big deal: this is a rustic pie after all!  The blind baking is quite important, I think - I tried to make a pear and plum pie last night without the blind baking stage and it was a bit wet and not crisp like this one.

Take out of oven and tip in fried apples, sprinkling another spoonful of sugar over for luck.  Bake for around another 20 minutes.  Leave to stand for a few minutes so that it isn't napalm-hot.  Serve with ice cream (caramel ice cream particularly good!)

Sunday afternoons I like to listen to Jarvis Cocker on radio 6 and cook something simple that takes quite a while, smells like a big proper meal and will easily do for dinner the next day.

Ahh, so yummy! Almost a bit too rich actually, with that much cheese (and gosh it's lovely cheese) but delicious all the same. Tuesday Night's dinner - Spicy Squash (not butternut) soup and soda bread - which is pretty much my perfect homemade winter supper.

Friday nigh's dinner - Pork Shank in spices and chilli and stuff with apples and onions underneath with red wine vinegar and baked potato and Savoy cabbage. Cheapest roast ever. I love rooting for the shanks under all the expensive pork - best value cut ever - £2 does about 6 meals plus soups and bits...
Collapse